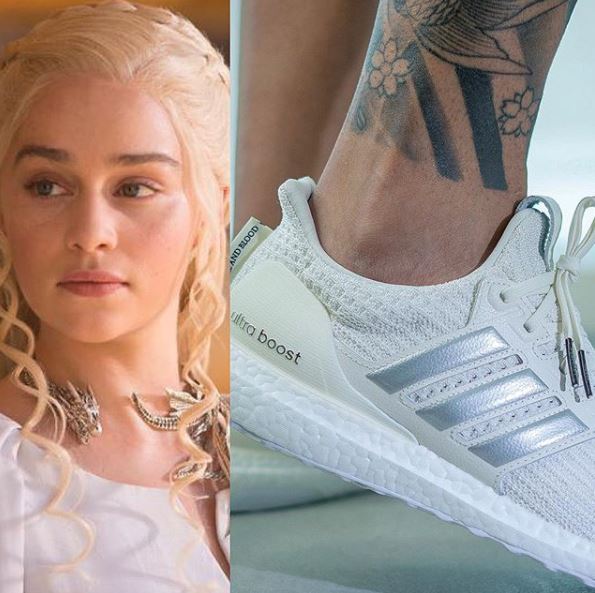 It wasn’t long ago since we found out that Adidas is collaborating with the award-winning HBO series Game of Thrones (GoT). Now, like winter, the final season of GoT is coming. And what better way to celebrate it than to release GoT-themed UltraBoosts! Thanks to sneaker leakers, we have close-ups of two GoT UltraBoosts, Stark White and Fire and Blood.

GoT UltraBoosts of House Targaryen

The House Targaryen GoT UltraBoosts got some new pictures over the weekend. Thanks to @solebyjc and @yankeekicks we now have a more detailed look at the pairs.

The cleanest of the two, dubbed “Stark White” is the Daenerys Targaryen inspired UltraBoost. White all around PrimeKnit upper with silver stripes, it comes in a colorway that pays tribute to her silver head of hair. It sits atop a white Boost and outer sole. Furthermore, leakers say that these come in women’s sizing only.

The name of the colorway “Stark White” is a funny reference to the characters from House Stark. However, it has little to no relation to Daenerys. Of course, besides the fact that her brother Rhaegar loved Lyanna Stark and had a son, Jon Snow. Which of course would mean that he is, of course, the rightful heir to the Iron Throne. Not the silver-haired Mother of Dragons. Yes, that’s facts.

In the picture is the GoT X Johnnie Walker White Walker-themed wrapping just for perks. 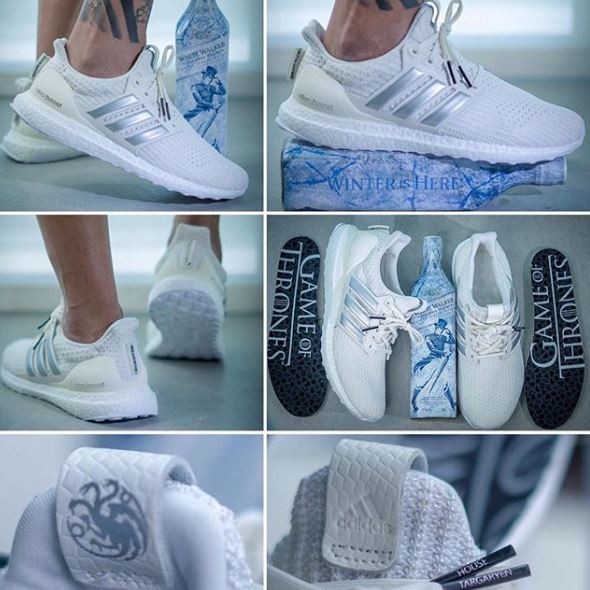 The white Mother of Dragons shoe cannot come without its greatest weapons, the dragons! Colored in an ombre pattern from black at the heel and color then going brighter red then yellow-ish at the toe, the House Targaryen Dragons literally scream fire. But the best part of these images is the details.

On both the “Stak White” and “Fire and Blood” pairs, the ankle tab reads the House Targaryen words, “Fire and Blood.”  The aglets, which is the plastic or metal at the tip of the shoelaces, read “House” and “Targaryen.”

Finally, the shoes cannot be complete without custom GoT-themed insoles and the House Targaryen emblem on the inner tongue tab.

The GoT UltraBoosts are scheduled to drop sometimes in 2019. In addition to the House Targaryen UltraBoosts, the drop is to include sneakers for House Stark, House Lannister, Night’s Watch, and the White Walkers.