Adidas Retro These Old-School Silhouettes in 2018

With the dad shoe trend taking control this year, Adidas found the perfect opportunity to retro some of its old-school silhouettes. When they first dropped, sneakerheads didn’t welcome them with arms wide open. At least not as wide as they would today. Sneakerheads didn’t welcome the Yeezy 700 Wave Runners at first either. But the trend is growing and taking over, making bulky shoes more acceptable and even fashion forward. For example, the Yung-1 is just one Adidas retro that we’ll see release this year.

Adidas Retro the Falcon Dorf aka the Yung-1

The Adidas Originals Yung-1 is an Adidas retro of the Falcon Dorf. At first, the world thought this shoe had something to do with the Dragon Ball Z x Adidas collab. But it turns out this is just the OG colors of the Falcon Dorf. It was first created in 1997 as a sports shoe or runners. Adidas runners dubbed it the Falcon Dorf after the name of a small village they would pass every day on their run, Falkendorf.

To cater to the women, the brand with the three stripes decided to take this silhouette and create the Adidas Falcon. The shoe takes on a more feminine twist as from the Falcon Dorf, Yung-1. Although women would love to have what the boys wear, this is their exclusive pair: 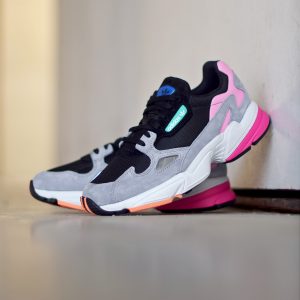 The Adidas Originals Temper Run is from 2014, and it was then inspired by vintage shoes. As you can imagine, it may not have done nearly as well in sales as it could do now. What’s a more perfect time for this Adidas retro?

On May 5th, there was an exclusive release of two colorways of the Temper Run at the Adidas store in Hanbury Street, London.  But now it seems as though we should expect more colorways to drop, according to sneaker leaker, @py_rates.

In addition, Adidas is also bringing back the Micropacer and mashing it up with the NMD R1. The Micropacer was an iconic shoe from 1984 that was the first smart shoe. It could calculate calorie burn and pace and distance of running. It’s 2018 rendition will be known as the Futurepacer. 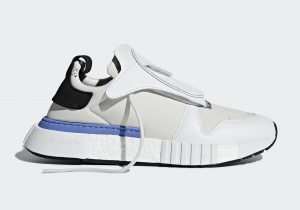 Adidas is keeping that authentic vintage vibe with its retros. Even the colorways in both silhouettes are old-school. Yet some of the muted colors could still be worn years for years to come. Keep your eyes open for these will most likely release later this year.