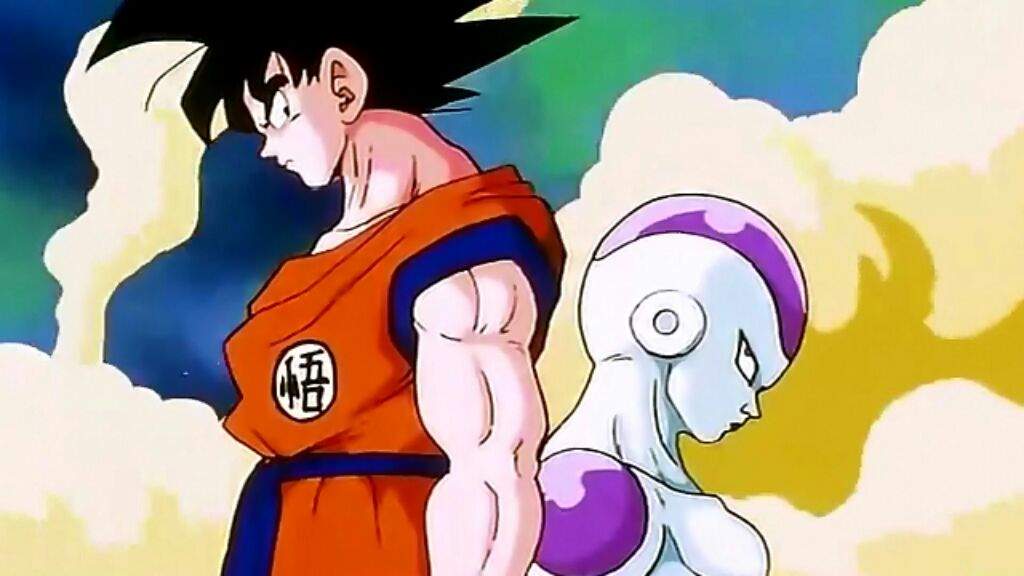 We’ve waited long enough for this collection to release. In fact, you could be expecting a child and received it before the Adidas x Dragon Ball Z sneakers drop. But the wait is nearly over now. This month, we’re getting two of eight sneakers that are releasing in honor of the Dragon Ball Z adventures.

One of the main reasons these shoes are dropping is probably because three DBZ movies are supposed to come out this year. According to Forbes, two events will take place in which the three movies will screen. The first movie is Dragon Ball Z: Broly – The Legendary Super Saiyan, and it’ll show on September 15 and 17. The second and third movies, Dragon Ball Z: Bardock – The Father of Goku and Dragon Ball Z: Fusion Reborn, will screen on both November 3 and 5.

We think those are interesting dates considering two shoes are to drop in Septemeber and two more in November. As preparation for the movies, two pairs dropping in August. They are the Adidas X Dragon Ball Z ZX500 RM Goku and the Yung-1 Frieza.

Both Goku and Frieza’s shoes are remakes of older silhouettes from the 80s and 90s. The Yung-1 is a reworked pair of an old-school running shoe called the “Falcon Dorf” and the ZX500 will be coming back this time around with Boost in the sole.

For Goku’s ZX500 RM, features on the shoe are very detailed to the last bit. There’s even Goku’s yellow Flying Nimbus on the front of the shoe and his Goku symbol on the heel tab.

Frieza’s menacing silhouette is cold. Resembling his character, the Yung-1 is dressed in white and purple with hints of pink. Leather, mesh, rubber, and more material will comprise the shoe.

Both sneakers include a Dragon Ball Z insoles and may drop alongside collectible figurines. The release date is not yet clear, but keep your eyes open for any possible day this month could be the day. Finally, they may both retail for $150. 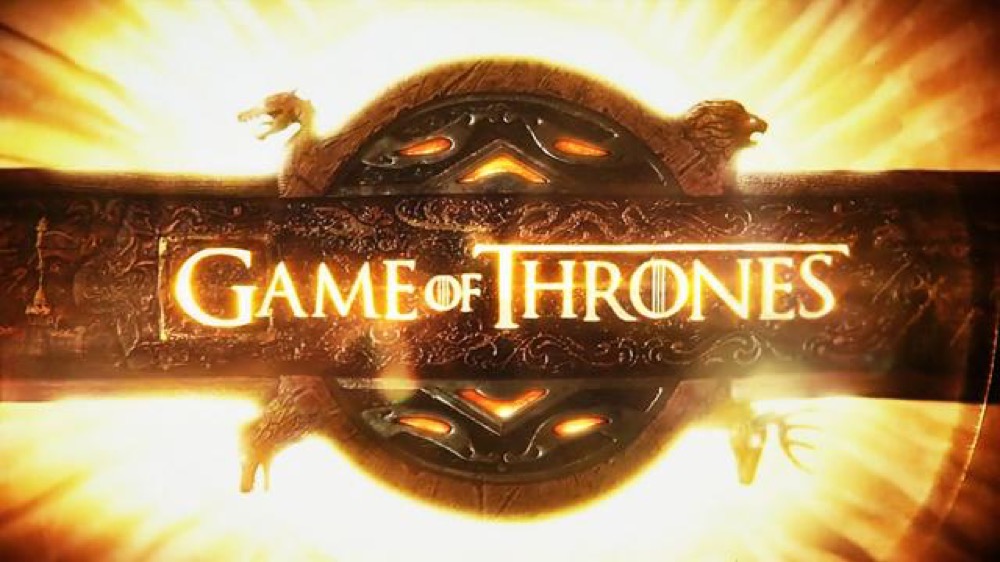 The Adidas Game of Thrones UltraBoosts Are Coming (in 2019)

Inspired by the HBO fantasy TV series, Adidas is releasing a GoT-themed collection. With the next (and final) season of the series is due next year, winter couldn’t come any quicker. The Adidas Game of Thrones UltraBoosts collection drops sometime in 2019.

According to the 9.5/10 IMDb rating, one can tell that Game of Thrones is a globally adored series. With ratings that high, Adidas knew it would be stupid not to feed off that fame. This is pretty much like they’re doing with the Dragon Ball Z collection, but better.

Thanks to the Yeezy Mafia, and their detailed mockups, we have six UltraBoosts coming our way. Hopefully, we’ll finally know what it’ll feel like now that Winter is Coming. In the collection are the Houses of Stark, Lannister, and Targaryen, and three more UltraBoosts representing the Night’s Watch, White Walkers, and Dany’s dragons. Ugh, such anticipation for the show to air in 2019 and the sneakers to release.

The House Stark UltraBoost sports Wolf Grey uppers (like the Stark Direwolves), black accents, black Boost outsoles and is complete with “Winter is Coming” tag on the heel.

House Lannister of King’s Landing get’s the royal treatment with gold accents on the upper. The red color is unmistakably that of the Lannisters and as their sigil is a lion, the heel tag reads, “Hear Me Roar.”

Known for having silver hair, the House Targaryen UltraBoost is white with silver details all over and withing. The shoe is completed with a heel tag that reads, “Fire and Blood.”

It would be an insult to the Mother of Dragons if we didn’t see her “little” ones get a pair of UltraBoosts. Smoked out black for the most part, the shoe features a firey PrimeKnit. Belonging to House Targaryen, the heel tag also reads, “Fire and Blood.”

Somehow you can imagine a brother of the Night’s Watch wearing these UltraBoosts, with a white Boost, toe, and heel as if covered in snow. In addition, the black speckled upper represents the night sky.

ULTRABOOST GAME OF THRONES – NIGHT’S WATCH
YOUR WATCH WILL BEGIN IN 2019 pic.twitter.com/6jrBFYP3Wq

Finally, the ice cold UltraBoosts with icy blue accents to represent the peircing eyes of a White Walker, and the ominous “Winter Is Here” tag.

What a way to tribute such a crowd-pleasing show. Fans are both excited yet have that bittersweet feeling that their favorite series will end. But that’s okay because we’ll have more time to catch up on other shows. Speaking of tributes, check out Pharrell Williams’ ode to the motherland, Africa, in his NMD Solar Pack. 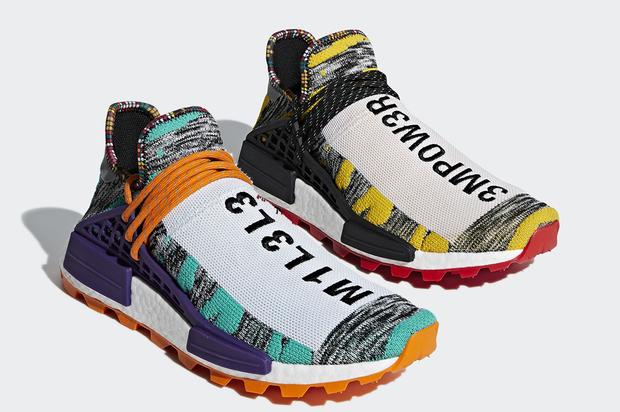 A mashup between “Happy” singer, Pharrell Williams, and behemoth sneaker brand, Adidas, gives birth to an unforgettable line called the PW Adidas NMD Hu. The latest PW Adidas NMD Hu to release will be the Afro Pack which recently had a name change to the Solar Pack, as per the Yeezy Mafia.

With a Chinese pack and a Holi pack out of the way, the next pack draws inspiration from the motherland, Africa. Indeed, after making sneakers to commemorate nationalities around the world it’s only foreseeable that Williams designs an African inspired pack to honor his roots. However, now the Afro Pack is renamed to Solar Pack and there’s no reason why.

Two of three upcoming colorways appear in the Yeezy Mafia’s post, one teal/grey pair and a yellow/black pair. Besides the unique and wild choice of colors for the upper, details on the shoes suggest references to African heritage.

For instance, the teal and grey upper has the writing, “Milele Mbele.” Some people say means Forever in Swahili, while others are saying it means Go Forward. Whatever the case, both sound like something you can find on any PW Adidas NMD Hu.

The yellow and black pair reads “Empower and Inspire.” Finally is the last colorway, which was thought to be red. However, the Yeezy Mafia says that the red pair has been changed to pink. This pink pair will read “Mother Land.”

But, speaking of a Solar Pack, Pharrell Willams has a shoe in the making which we’ve seen before in this article.  The bold PW Adidas Solar HU Glide ST is an all-new silhouette and not your regular PW Adidas NMD Hu. It comes with a PrimeKnit-like upper and hits of bold colors like red, blue, green, yellow, orange, and so on. Furthermore, it all rests atop a Boost midsole.

A week ago we told you that your Yeezys will be delayed till fall. But the wait is over, you don’t need to guess when your favorite Yeezys will be released. The Yeezy Mafia just hit us up with the new Yeezy line up for Fall/Winter 2018 and gave us a rough estimate of when to expect our kicks.

Allegedly, these Yeezys got pushed back due to the increase in production numbers. The Cream Whites were meant to drop in July and the Sesame in August. However, dates got changed, and it’s said that Yeezy Supply will be opening up warehouses in Europe and Asia. That may explain the sudden production level increase. Whatever the case, Kanye’s dream to make Yeezys available for everyone could be coming true.

The New Yeezy Line Up

In addition to the new Yeezy releases we’re expecting, last year’s Yeezy 350 V2s are getting a comeback. The Cream Whites and the OG Yeezy 700 WaveRunners, along with the Zebras and the Semi Frozen Yellows are coming back and with more force. In November, the Yeezy 500 will be dropping in the Salt colorway and a whole new colorway for the 700s will drop.

It’s great that sneakerheads can get a chance to cop the Yeezys they missed out on last year, but what we’re really hoping to see soon is more leaks about the Yeezy 700 V2. We imagine the next one to take the dad shoe trend into a more futuristic aesthetic.

Nevertheless, the Yeezy Mafia came through with this post. But most of you may be too busy drooling over the new Yeezy line up to notice that it says, “Subject to change,” on the top right corner. This means, prepare for these months, but don’t get confused over a last minute date change.  All these heavy shoes will kill our bank accounts. That’s why copping more than one and selling the other for double will save your wallet.

The first Yeezy Boost of 2018 will drop by the end of this month. And with Drake’s Adidas deal allegedly coming our way, it’s only natural to appreciate the celebrity collabs that we already can’t cop. Of course, all that may change since Kanye wants to make Yeezys attainable for everyone.

The Problem With Exclusivity

Yeezys have always come in limited stock, that’s mainly why they’re valuable. The moment the release goes live, the pairs immediately sell out. That exclusivity creates high demand for the shoes, allowing resellers to manipulate the prices however they want. You can end up paying more than five times the retail price.

Back in 2015, Kanye West made a statement on Ryan Seacrest’s radio show that Yeezys will eventually become accessible to everyone. Watch the video to hear the statement:

Three years later, that promise could finally be coming true.

Well, all those delays make our article about 7 Upcoming Yeezy Releases in Summer/Autumn 2018 a bit pointless. However, the good news is that the Butter did not get delayed till Autumn. Instead, you can expect the Yeezy 350 V2 Butter to release on June 30, 2018.

On July 7th, the Yeezy 500 in an all black colorway will release. It will be the last Yeezy for the summer until we find out when the delayed shoes will drop.

But as for the rest of the Yeezys, just get ready for a wild holiday season including the Yeezy Boost 350 V2 Zebra and Semi Frozen Yellows dropping in October. Good luck folks!