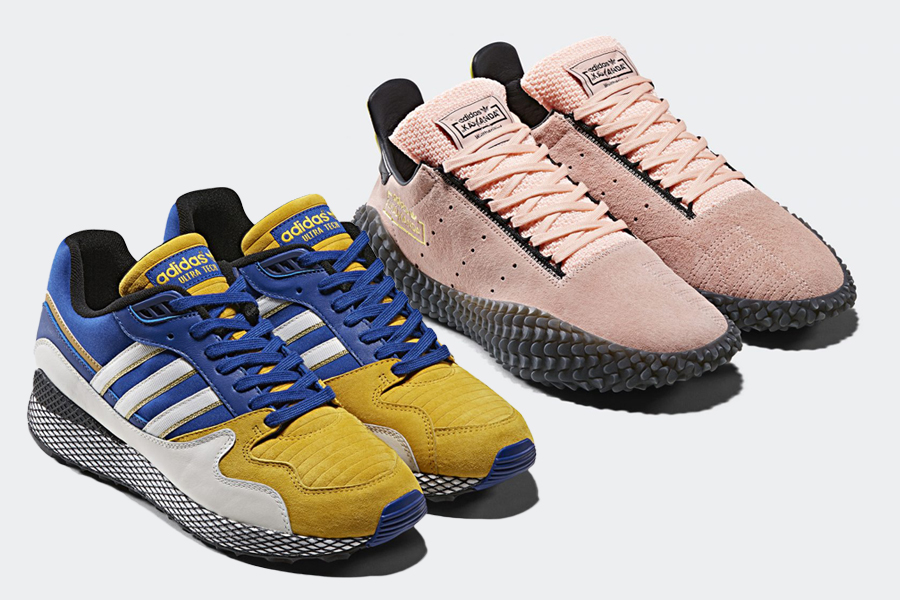 During the month of November, we gather ’round to remember the things we are grateful for. If you’re a fan of the Dragon Ball Z adventures, then you’re surely thankful that this Adidas DBZ collaboration exists. Thanks, Adidas. This month, the third Adidas Dragon Ball Z duo drops. No release date yet, but expect the Adidas Kamanda Majin Buu and Ultra Tech Vegeta to drop towards the end of November.

To match the character, the Adidas Kamanda Majin Buu is constructed of a pink suede upper resting atop a translucent gray rugged sole. It is accented with hits of black and some yellow and gold detailing.

For some odd reason, the villain characters’ models are getting more love than the Super Saiyans. People, even those who aren’t fans of the DBZ series, sought out the Yung-1 Frieza. In addition, comments regarding the Prophere vs. Deerupt put Cell’s silhouette in higher regard than the netted model.

That’s precisely the case with the Kamanda Majin Buu. News sites and leakers are all highlighting the soft pink suede Kamanda model. However, not much buzz is on the Vegeta Ultra Tech.

For the hero Vegeta, Adidas is using an old-school silhouette from the 90s. They did the same with Frieza and Goku’s models. Adidas brought back the Ultra Tech in 2018, and now they are including it in the Adidas Dragon Ball Z collection.

The upper includes a mix of deep blue mesh and yellow/gold suede at the toe and tongue. Details of white and black complete the look. Similar to the Deerupt, the sole is netted. More details include custom Adidas Dragon Ball Z themed insoles and premium packaging.

There’s no word on an actual related date and the price is TBA. However, similar to previous Adidas DBZ releases, both silhouettes will drop on the same day. Except them both to release some time toward the end of November, since that seems to be the pattern.

Also, if you missed out on the Yeezy Zebra releases, here’s your chance!