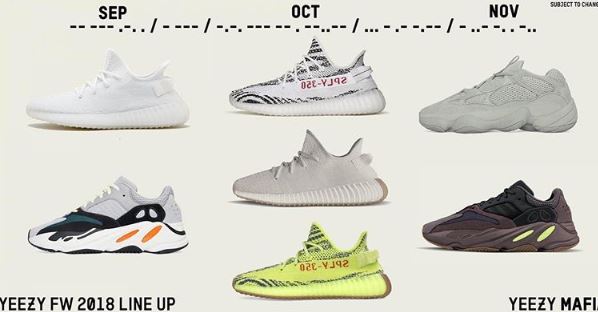 A week ago we told you that your Yeezys will be delayed till fall. But the wait is over, you don’t need to guess when your favorite Yeezys will be released. The Yeezy Mafia just hit us up with the new Yeezy line up for Fall/Winter 2018 and gave us a rough estimate of when to expect our kicks.

Allegedly, these Yeezys got pushed back due to the increase in production numbers. The Cream Whites were meant to drop in July and the Sesame in August. However, dates got changed, and it’s said that Yeezy Supply will be opening up warehouses in Europe and Asia. That may explain the sudden production level increase. Whatever the case, Kanye’s dream to make Yeezys available for everyone could be coming true.

The New Yeezy Line Up

In addition to the new Yeezy releases we’re expecting, last year’s Yeezy 350 V2s are getting a comeback. The Cream Whites and the OG Yeezy 700 WaveRunners, along with the Zebras and the Semi Frozen Yellows are coming back and with more force. In November, the Yeezy 500 will be dropping in the Salt colorway and a whole new colorway for the 700s will drop.

It’s great that sneakerheads can get a chance to cop the Yeezys they missed out on last year, but what we’re really hoping to see soon is more leaks about the Yeezy 700 V2. We imagine the next one to take the dad shoe trend into a more futuristic aesthetic.

Nevertheless, the Yeezy Mafia came through with this post. But most of you may be too busy drooling over the new Yeezy line up to notice that it says, “Subject to change,” on the top right corner. This means, prepare for these months, but don’t get confused over a last minute date change.  All these heavy shoes will kill our bank accounts. That’s why copping more than one and selling the other for double will save your wallet.