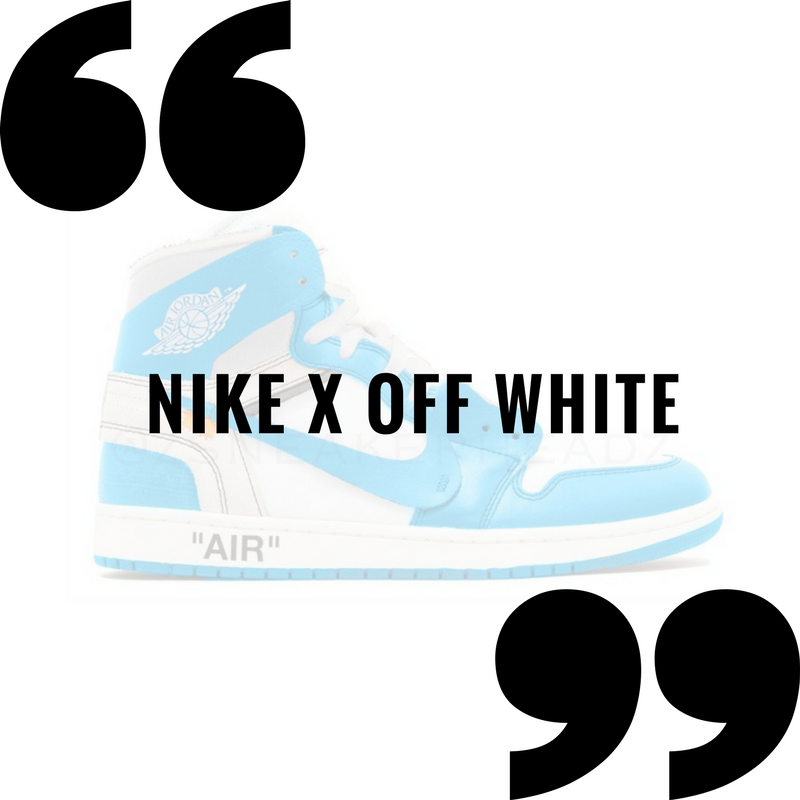 What a juicy week for Nike x Off White releases!

Virgil Abloh is one very busy man. How he juggles all this work, no one knows. Abloh is Kanye West’s longtime creative director, much before he became the founder of his own brand, Off White. Today, he’s proudly the first African American to become Men’s Fashion Artistic Director at Louis Vuitton. But, of course, sneakerheads know him best for his work on 10 loved Nike shoes.

The white on white Off White x Air Jordan 1 dropped earlier this year. But that was just the beginning of many Nike x Off White shoes waiting to release. @Py_rates are truly the plug when it comes to limited sneaker and specifically Nike releases. Several different informed leakers rely on their posts. They could almost be the “Yeezy Mafia” of Nike drops. The following information is provided by their account.

The black version of this shoe released late last month, while the white version will see its release among several hyped sneakers dropping on Saturday, April 14th.

@Nike X @off____white Will be dropping their 2 new Vapormax's starting with the Black pair on 30th March. The White pair will see a later release on the 14th April. Which colour-way do you prefer? Tag a friend who will be looking to cop a pair. #NoMoreSecrets 🏴

Ah, the one that never dropped is finally dropping and the release date is rumored to be May 10th! Mark your calendars!

After being rocked with production problems it looks like @Nike & @off____white have over come there issues and will be dropping the @converse CTAS 70 Hi which featured in the original 'The 10' collection. The pair will be dropping on the 10th May 2018. Will you be looking to cop a pair now that the wait is over? #NoMoreSecrets 🏴

The world will be blessed with the third Off White Air Jordan 1 to release. Initially, it was thought to come in a UNC blue colorway, but py_rates are providing us with a better mockup featuring a dark powder blue instead. Truly a unique pair of Jays. The predicted release date is some time next month, retailing for $190.

Another shoe that’s likely to drop in May is this. The Nike X Off White Air Force 1.

Check out the official pics for the @Nike x @Offwht Air Force 1 in White which was better known as the 'Complex Con' exclusive. With the official pics just being loaded we can expect a drop very soon. Are you excited by the prospect of being able to cop soon? #NoMoreSecrets 🏴

Not one, not two, but THREE colorways of the Nike Blazer Studio Mid?! That’s interesting. Last year we saw the white colorway release. This year we start with the Vanilla pair. To be quite honest, it looks like leftover white pairs that got dirty. But these are just mockups and the real deal will definitely have some differences. That one will supposedly release in July.

There will be a 3rd @Nike x @off____white Blazer dropping this year. This 'Canvas Yellow' pair will be dropping sooner than the other 2 in July. Check out our mock up of what to expect below. Please RT & Follow for more info. #NoMoreSecrets 🏴

Following the dirty vanilla pair will come the most dope one of them three, the Wolf Grey colorway. It’s set to release in September alongside the Black pair which is also pretty decent.

@virgilabloh is back again with another @Nike x @off____white 'Blazer Studio Mid'. The pair will be dropping in a Wolf Grey/Pure Platinum/Black/Cool Grey colour way, set to drop later on this year in September. Let us know what you think to the new colour-way in the comments below. #NoMoreSecrets 🏴

@Nike X @off____white will be adding a 2nd Blazer to this years ‘The Ten: Part 2’. This Black pair will drop in September like its Wolf Grey counterpart. Which one of the new colour-ways do you prefer? Tag a friend who would appreciate these. #NoMoreSecrets 🏴

The October Nike x Off White releases are many. We start with the Zoom Fly which a black pair of the white one that released in The Ten part 1.

Continuing on with the Black & White theme @nike & @off____white have going on in Part 2 of their 'The 10' collection, the duo will be dropping a new colour way for the Zoom Fly this October. Will you be looking to cop this version of the Zoom Fly? (Picture = Mock up done by us) Tag a friend in the comments below who would love to own a pair. #NoMoreSecrets 🏴

But that’s not all for the Zoom Fly, get an eyeful of these bright pink kicks! Anyone say Breast Cancer Awareness month? That’s also in October! But we’re just guessing here. Who knows when these will actually release? No date has been confirmed yet.

*@Nike x @off____white are planning on dropping a new colour-way for the next ‘Zoom Fly’, this one’s definitely alot louder. We have come up with 4 different mock ups of how we imagine the shoe will look on the early info we have at this stage.Let us know what you think In the comments below is this a cop or drop situation for you? Tag a friend who'd rock these. #NoMoreSecrets 🏴

Following that, the Air Force 1 Low, similar to the MoMA one that dropped before. October’s your second chance to cop it.

@Nike x @off____white will be dropping another black 'Air Force 1 Low' this October. Which do you prefer our mock up on what the shoe could look like or the @MuseumModernArt version that dropped previously? Let us know in the comments section below. Tag a friend who would love a pair of these. #NoMoreSecrets 🏴

And of course, the white Air Max 90 from the Off White The 10 collection would be devastated without its black counterpart.

Part 2 of 'The 10' by @Nike x @OffWht will feature a Black/Cone/White/Black 'Air Max 90' which is set to drop in October 2018. A month after the new 'Blazer'. What do you think of the new colourway? Better than the OG? #NoMoreSecrets 🏴

And finally, the last leak so far is the Air Max 97 releasing in two colorways. The black colorway will be releasing to compliment the white pair from 2017. That’s no surprise. But then we have a white one with mint accents and a grey sole, now that’s unique.

This November @Nike x @off____white will be dropping two new colour-ways in the Air Max 97's. As Part 2 of The 10 begins to take shape we see @virgilabloh make use of more vibrant colours such as 'Menta'. Let us know what you think to our mock ups in the comments below. Tag a friend who would cop. #NoMoreSecrets 🏴

And there’s more to look forward to! According to Hypebeast, Virgil Abloh will be presenting us two new Air Prestos. One black and one white.

Stay tuned to our blog for more information regarding Nike x Off White drops as the year unravels.