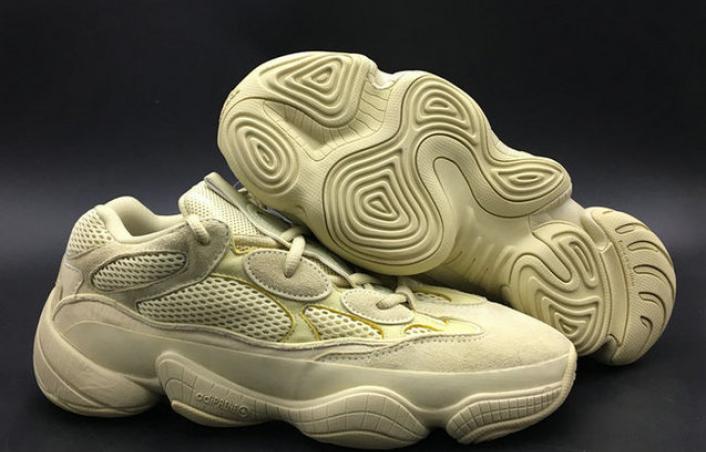 The Yeezy Mafia take to the internet to continue sharing the news with their rumor thirsty sneakerhead followers. The latest Tweets show dates for two hype Yeezy 500 releases. Guys, it’s going to be hot this summer!

The two upcoming Adidas Yeezy 500 sneakers are the true contrast of one another. One is completely light colored while the other is all black. They both follow the same monochromic scheme that is relative to all Yeezys lately.

Back when it was called the Desert Rat, this particular colorway had a story of its own. Kanye cleverly used his loving wife, Kim Kardashian, to market his apparel line when the Yeezy 500 Super Moon Yellow on foot. A bundle was sold on Yeezy Supply for a sweater, bike shorts, and the sneakers for $760. For the heavy price of $760, the average resale price of $400 does no justice to the resellers.

In contrast to its predecessor, the Yeezy 500 Utility Black has no fishy story. At least not an official one by Kanye and Yeezy Supply. However, the Yeezy Mafia did pull an April fool’s prank on gullible sneakerheads by posting that the shoe was up for sale for 12.345,000 euros. Luckily, fans were quick to catch on to the joke. And now they know how long to wait.

This somber colorway will drop on Saturday, July 7 for $200.

According to the Yeezy Mafia, we may be welcoming another two Yeezy 500 colorways in Fall 2018. The deep purple upper sitting on a gum sole is the Yeezy 500 “Ultraviolet” and the all-white “Salt” dropping in October.

Moreover, Kanye West’s back on Twitter, and he’s finally taking us into his lab. Recently shared several images of new colorways. One of those is an image of some brighter colored Yeezy 500s.

They definitely stick to the same purple-ish side of the Ultraviolets. They’re far better than the Yeezy slides, and we can’t wait for them to drop, along with some fresh 350 V2s dropping this year.